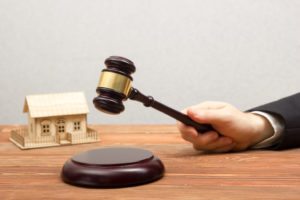 Kirkwood received national attention in February of 2008, when resident Charles “Cookie” Thornton entered a city council meeting and unloaded a live chamber of ammunition into several people in attendance at the meeting. There was and still is today much public speculation on what motivated a civic minded citizen to go on a murderous rampage. One thing is for sure: Thornton was very unhappy that the government forced hundreds of Meacham Park residents to relocate due to the issuance of an eminent domain order.

What about the Fifth Amendment?

The framers of the Constitution created 10 legal rights that safeguard our civil liberties. Eminent domain law derives from the “Takings Clause” found within the Fifth Amendment of the United States Constitution. Our founding fathers represented the wealthy landowner class of new Americans and such, they wanted to add an amendment that protected landowners from tyrannical land grabs performed by an overbearing government. However, the framers of the Constitution also understood that there would be times when the government legitimately would need private land for the good of the citizens. The “Takings Clause” declares that “private property [should not] be taken for public use, without just compensation.”

What Does Just Compensation Mean?

The United States Constitution clearly states that private landowners subject to eminent domain orders must receive “just compensation” for their losses. Just compensation often refers to the fair value a landowner would expect to receive for his or her property on the open market. Land value encompasses several factors that include size and the presence of resources. Sometimes, the government issues eminent domain decrees for limited periods, which makes valuing “just compensation” difficult to do. Landowners accused of criminal activity within their properties typically receive no compensation for the loss of land.

The Term Public Use Has Expanded in Meaning

The reasons for issuing eminent domain orders have increased over the past 20 years. What was once a legal order intended to improve the welfare of citizens has morphed into a profit generating maneuver, as evident by the Meacham Park eminent domain edict. Properties throughout the United States come down to make room for shopping malls and industrial parks. Even ambiguous aesthetic reasons have been filed in courts as legal motivation to take private property. Eminent domain has become such a contentious issue that a couple of cases contesting the use of eminent domain have slowly moved up the legal system towards the Supreme Court.

The ambiguity of the term “Public Use” coupled with the equally unclear “Just Compensation” clause of eminent domain orders means landowners must seek licensed real estate attorneys that understand how to litigate eminent domain cases. You not only want to work with an experienced attorney who specializes in eminent domain cases; you also need an aggressive lawyer that never backs down from the powerbrokers that want to take your property.

HERE COMES THE TAXMAN - A LOOK AT PROPERTY TAXES They say there are two certainties in life: Death and...

How to Avoid Foreclosure If the 2007-08 financial meltdown taught us anything, it was...